The National Bank of Kyrgyzstan has issued the fourth series of updated banknotes. Kyrgyz som is considered to be one of the most beautiful banknotes in CIS countries. Designer Dmitry Lysogorov told 24.kg news agency a lot of interesting facts about the creation and production of som.

-Dmitry Evgenyevich, why it were you?

– Management of the National Bank turned to the Union of Artists. They needed experts in graphic design. I graduated from Mukhin High School with a degree in graphic design and packaging. There were few such specialists at the time. Taalay Kurmanov also studied the same specialty. He was the chairman of the Union of Artists then. But this information passed him by, another person was on duty and gave request of the National Bank to me. We invited also Anatoly Tsygankov, who was illustration art specialist.

– So did they say directly that need designers for national currency?

-Of course not. The next day, I together with Anatoly Tsygankov came to the National Bank after a call. Its chairman Kemelbek Nanaev told about the task. After a conversation with the chairman, we started studying the issue. Special commissions – the historical, linguistic and artistic worked on the creation of the national currency. Historians gave recommendations on the characters which should be portrayed on the bills. Linguists – on the language and what should be written. And we, the artists, were to create a design.

– And who decided how the banknotes would look like?

-Some work has been done. As a result, the issue of banknotes scheme has been determined together with the specialists of the National Bank. We decided that it would be banknotes with denominations of 1, 5, 10, 20, 50 and 100 soms. We were given pictures of characters, which we have to draw on the bills. Later, we were set the task to develop sketches of tyiyns. 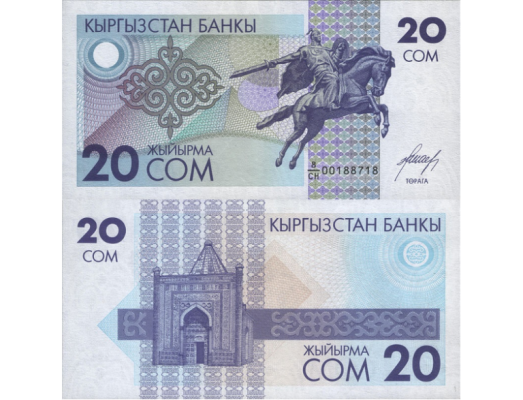 -And did you start sketching immediately?

– No. First, we have studied currencies of other countries. There was no Internet at that time – there were also no computers. We gleaned the information. Later, we were sent to Latvia, which was the first country in the former Soviet Union that began production of its own currency. Their artist shared with us the secrets of creation of money. By the time, Turkey expressed interest in printing the Kyrgyz som. We went there to see the process of money printing. But we did not like it. We were received very well, but we were not satisfied with organization of production: there was no computerization, although we knew that it was in other countries. Askar Akayev was the president at that time. He met with us, listened to the opinion of designers and other specialists, and decided to send us to England. We were shown the entire process of making money there.

– If everything was so carefully prepared, why the first series of soms is called temporary money?

– Detailed work on the creation of sketches started after a trip to England. We were suddenly informed that temporary money was prepared for issue. Then, a consultant from the Netherlands was in Bishkek. We were told that we have to submit the sketches to him in three days. We with Anatoly Petrovich drew lots. I got soms and he – tyiyns. I drew three sketches of the currency, and three denominations – 1, 5 and 10 soms have been issued.

– You, probably, were very proud when soms have been printed?

– No. I did not like it at all. I drew sketches using colored pencils, but when they were printed, they looked quite simple. Then the state had no money for a more expensive printing. And the paper quality was poor. One day, my wife washed trousers with new money, so it all faded. 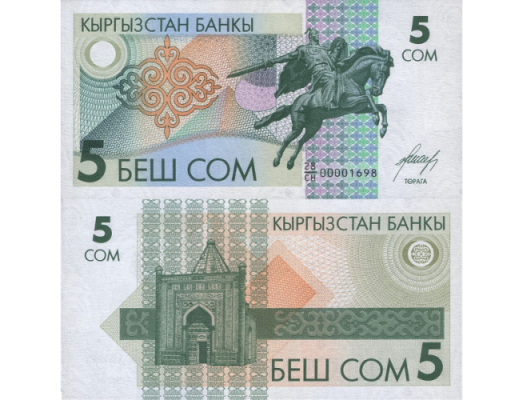 – Is the quality of current KGS better?

– Of course. Kyrgyz soms are made well as for the elements protection. Everything is at the highest level. They are printed by specialists who have extensive experience and advanced technologies. In this part, our currency meets all the requirements.

– On January 1, 2017, the National Bank put into circulation updated banknotes of the fourth series. One of the bills- 200 soms- provoked criticism. Ostensibly, portrait of Alykul Osmonov on it is fuzzy …

– You have to know the technology of banknotes’ printing. The first portrait was made in another way. Its quality was not very good. Then the National Bank changed it to engraving. This is a classic style when a portrait is made through engraving. As for the allegations that Alykul Osmonov’s eye squints, I did not even notice it. I can say that it is not necessary to blame the National Bank. Engraver very accurately transferred the image from the photo on the bill. 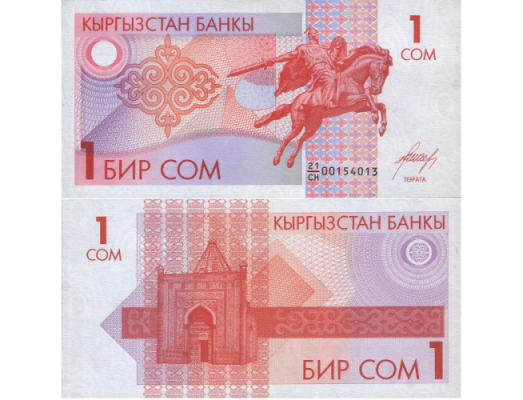 – And what is your favorite bill?

– I like 5,000 soms banknote. Banknotes of 500 and 1,000 soms are also very good. I find it difficult to say something about the preferences, because I know all the founders of the national currency and took a hand in its creation.

Find the full article below: